Road risks due to close passing by drivers 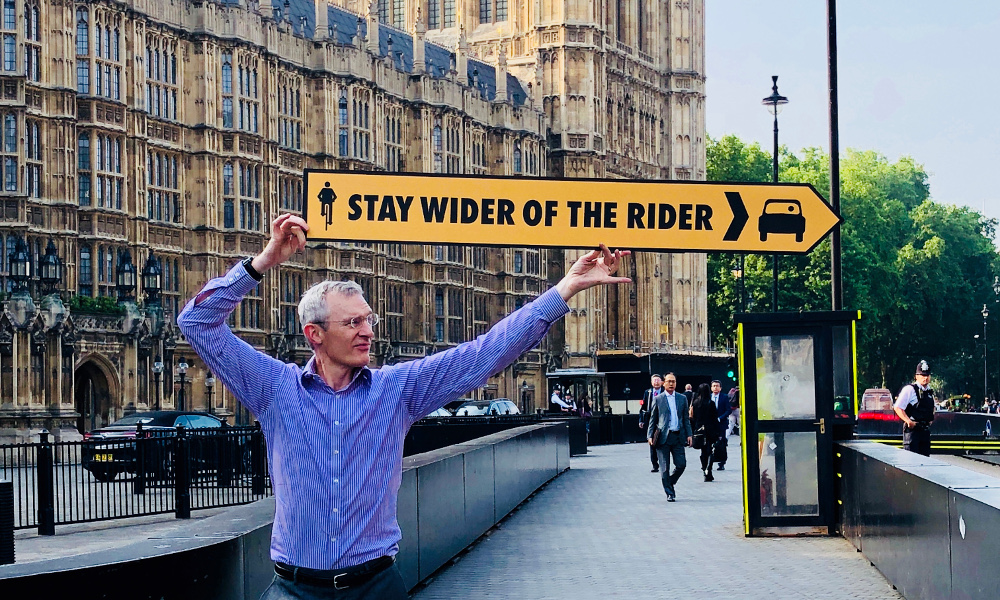 An online survey* for the London Cycling Campaign’s ‘Stay Wider of the Rider’ initiative, responded to by more than 3000 members and supporters, showed 23% said “close passing” happens every time they cycle with 45% admitting they experienced it frequently. This means two thirds face it on a regular basis, leaving them at risk of accidents and injury.

When asked to rate “close passing” on a scale of 0-5, with 5 being the scariest and intimidating, those answering the survey online rated it at an average of 4.

The campaign - supported by Continental Tyres and Uber Eats - comes as Transport Minister Jesse Norman vowed on Friday to crackdown on the menace by giving police support to tackle it, alongside a training pilot for driving instructors.

Stay Wider of the Rider will see a social media campaign to educate cyclists and drivers about the distance that should be left when motor vehicles overtake cyclists fronted by a video featuring triathletes the Brownlee Brothers.

It also features a dedicated staywider.org website including an online map for cyclists to record incidents of “close passing” to create a picture of the issue. An online petition to Jesse Norman calling for support for every police force to run close pass operations, as well as a major public education campaign and publishing clearer guidance on safe passing distances is also being launched with the whole campaign supported by social content and bus-back advertising.

While the Highway Code states drivers should leave the same distance as if they were passing another car, both the LCC and Continental go further and offer deeper guidance to ensure rider safety. They are specifically urging drivers to leave a minimum of 1.5m at 30mph, 2m at faster speeds and never less than 1m in slow-moving urban traffic (below 20mph).

The LCC online member survey also found many cyclists had decided to change or adapt their behaviour in a number of ways because of “close passing”.

Mark Griffiths, Safety Expert at Continental Tyres, said: “Earlier this year we launched our own Sharing the Road campaign as a branch of our Vision Zero Initiative which aims for zero fatalities, zero injuries and zero accidents on the road.

“As a committed partner of events like Prudential Ride London, we believe it is crucial that drivers and cyclists can be safe side-by-side when travelling. Research we carried out showed three out of five car drivers, pedestrians and cyclists and nearly eight out of 10 lorry drivers believed training for road users should include more on awareness and consideration for other types of road users so we welcome the Government's new pilot for driving instructors but would hope this becomes compulsory in the future.

“Initiatives such as the Stay Wider of the Rider campaign reaffirm the idea of how we can raise much-needed awareness to ultimately keep every road user safe.”

Tom Bogdanowicz, Senior Policy and Development Officer of the London Cycling Campaign, said: “While it’s good to see the government beginning to take action, deterrence won’t be enough to tackle close passing. What we urgently need is a far wider campaign to raise awareness among millions of drivers just how dangerous close passing is. That’s what Stay Wider of the Rider can achieve.

“LCC has successfully campaigned for Dutch-quality cycling infrastructure for many years, but even in Holland a huge proportion of cycling still takes place on non-segregated roads where drivers and cyclists need to share road space; LCC will continue to campaign for more protected space for cycling, but we need initiatives like Stay Wider of the Rider to help educate drivers and reduce road danger for cyclists.”

Dad Tim Lennon, who filmed his daughter being close passed by a motorist and uploaded it to YouTube, added: “It makes me really angry. We were cycling along a quiet road in Ham and two cars passed way too closely to my daughter. Drivers need to realise that even when they think they have enough space to overtake, often they don’t, especially if vehicles are coming in the opposite direction too.”

The ‘Stay Wider of the Rider’ campaign has been launched at Parliament today (Thursday) at a special event and it is being sponsored by Continental Tyres and Uber Eats. Radio and TV presenter Jeremy Vine filmed footage on his helmet camera of “close passing” to show to invited guests.

In the social media video, the Brownlee brothers can be seen getting a bit too close and getting in the way of each other during everyday situations to reflect how vital it is that people can have the space they need when cycling. Watch it here>>> https://www.youtube.com/watch?v=TQPVfM5UhhY

Alistair Brownlee said: “Jonny and I both drive cars as well, and obviously ride our bikes an awful lot. Just take care. Remember when driving, as I do, that you're in a metal box and a cyclist doesn't have that protection around them, so it's really important to leave as big a gap as possible.”

Paul McManus, Head of Cities for Uber Eats, said: “We’re delighted to be working with the London Cycling Campaign on their Stay Wider of the Rider campaign. In partnership with organisations like the LCC, we're working to make London's roads safer for all road users by raising awareness of cycle safety issues.

“All road users must understand the importance of sharing space safely, especially when passing. The launch of the campaign today is a vital step in communicating this message and improving road safety for the thousands of couriers who use our app in the capital.”

The campaign has put together three key pieces of advice for cyclists and drivers as part of Stay Wider of the Rider. More advice and information can be found at staywider.org

1) When overtaking cyclists, drivers should know and follow the Highway Code by leaving them as much space as they would when passing a car
2) If there is insufficient space to pass safely, drivers should travel behind the cyclist until space to pass becomes available
3) At 30mph we advise 1.5m is the minimum safe distance while at faster speeds drivers should allow 2m and in slow-moving urban traffic (below 20mph), drivers should never overtake cyclists unless they can leave a minimum of 1m