New driver prejudice survey a cause for road safety concerns

Over 16 million UK motorists judge other drivers based on the colour, type, and cleanliness of their car and even let it affect how they drive according to a new study released today.

Some 45 per cent of Brits allow their own prejudices to affect how courteous or aggressively they act towards other road users – with something as simple as a bumper sticker prompting millions to see red.

In a survey of 2,000 drivers, more than a third admit they allow their assumptions to affect them behind the wheel, meaning they are intentionally more or less reckless as a result.

The research for Continental Tyres also revealed that we are twice as likely to not let someone out at a junction if they are in a flash car because ‘they think they’re it’. Yet, the biggest reason why drivers will not let someone pull out is if they can see the other person at the wheel using their mobile phone.

It was also revealed was that six in ten get agitated by a sticker for a rival sports team or in support of a cause or organisation. Mark Griffiths, spokesman for Continental Tyres, said: “It is alarming that 34 per cent of drivers will change their driving style based on a prejudice about something as unimportant as how clean a vehicle is.

“Keen observation is vital for road safety and this study was part of our commitment to making driving safer, while trying to understand the ways that motorists behave.“

It seems UK motorists are not bothered about the prejudices made about their car. Over half expect to be stereotyped – though only one in seven admit it affects their choice of car.

Occasionally it can count in our favour as the survey found that 27 per cent of people make an effort to be courteous to people in the same make and model of car as them.

Opinions are divided on hybrid and electric vehicles with one in three believing owners are right to consider the environment and an equal number describing them as ‘tree-huggers’ or ‘self-righteous’.

Mark Griffiths at Continental Tyres added: “We might form opinions of people based on issues like appearance, though for that to lead to more aggressive driving is dangerous. We think road users must be courteous to others at all times.

“Rather than aesthetic and other non-risk affecting features, the importance should be placed on factors like driving behaviour, car safety and tyre condition – as these are the things that really impact on safety. “

The top ten of drivers we are least likely to let in at a junction are: 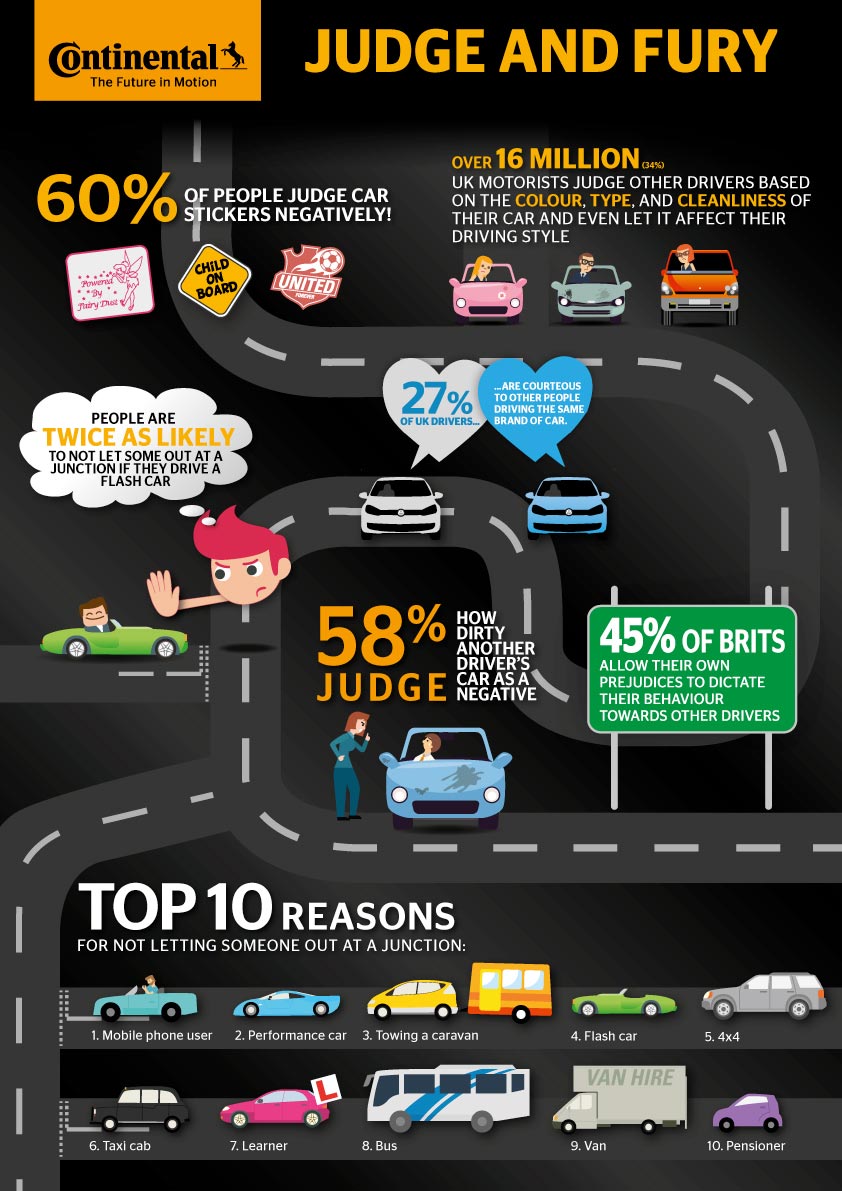